Tips From Around The Network: Rec'ing Comments

Share All sharing options for: Tips From Around The Network: Rec'ing Comments

A couple of weeks ago, we started a series of posts on Blog Huddle highlighting a feature of our platform and how to use it. The first tip was on adjusting the layout width and judging by the reaction on Amazin' Avenue and beyond, was informative and helpful.

Today, I am going to highlight rec'ing and flagging comments. There are many posts from around the network on commenting and navigating comments, but I am going focus on posts from Liberty Ballers, our Philadelphia 76ers blog, and Pension Plan Puppets, our Toronto Maple Leafs blog, for their sections on rec'ing comments.

The highlights after the jump.

And from Pension Plan Puppets:

There is also an "actions" button that you can click that gives you the option to Flag or Reccomend a comment:

Flagging is useful in the rare event we have a troll infestation or a comment is offensive or malicious, though often you all take care of this before the exterminator/banhammer needs called in through the gentle (just kidding) application of wit and logic. However, doing this helps me deal with trolls that I might miss or to give gentle reminders to people that sometimes forget that most people read the site at work. Don't flag comments to make a joke. You can however post a comment like "FLAGGED - Offensive" which shares the joke but it doesn't fill up my dashboard.

When a comment gets so many recs it becomes highlighted green:

You can also rec fanshots and fanposts. When a fanpost or fanshot has so many recs it becomes featured in the sidebar which moves it to the top of the list under the Recommended Fanshots or the Recommended Fanposts header. This helps set apart the best contributions as seen below: 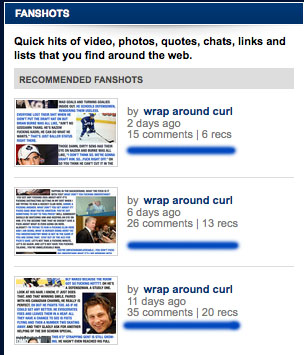 So there you have it. Rec'ing and flagging comments can be a great way for communities to highlight their best content and get rid of the content that shouldn't be there.