This week's top blogs are Troy Nunes Is An Absolute Magician, Blazers Edge, The Phinsider and Cartilage Free Captain.

It's the final days of 2013 and it's time to celebrate some of our blogs who were a cut above for the past couple of weeks. Happy New Year!

Troy Nunes Is An Absolute Magician

'Nunes Magician' is routinely one of the top performing SBN College blogs and provides a go to outlet for Syracuse fans of all degrees of intensity. Their recent #CuseTixForkids aimed to make up for Syracuse's bowl game, the Texas Bowl, being so far away from New York, by helping to put local Houston YMCA and boys/girls/military charities' youths in orange t-shirts in seats at the game. They raised Forty-four-thousand, four-hundred and forty-four dollars and forty-four cents to send over 1,400 kids to the 2013 Texas Bowl. And they did it while also providing orange t-shirts, food vouchers and a free slushie for each of them to boot. While manager Sean Keeley and company are tremendous bloggers, they're even better people and this just went to show how deep their charitable hearts really go. Extreme kudos to the entire TNIAAM team. We can't wait to see what you have in store for 2014 and beyond.

Great organizations, like the San Antonio Spurs in the NBA, are never satisfied. They understand that the status quo is an easy path down from the top of the hill so they find ways to take what's been working for years and build on it. That's Blazers Edge. Already at the top of the blogging world, this site upped their game for the 2013-14 NBA season. It just so happens that the site's new talent and fresh voices have corresponded with the team's surprising success on the court.

They still have Dave Deckard pulling it all together behind the scenes and giving it to Blazers fans on the front page. They still have in Ben Golliver the BEST blogger/reporter in the business delivering amazing dispatches deep in the early hours long after the fans have left the building. Now they also have Dane feeding the basketball nerds in-depth analysis and Chris and Sam adding news and game coverage support. Blazers Edge has even added a video podcast to their mix this season. And once again, BE is pulling leading the passionate Portland fans to give back to their community in the form of ONE THOUSAND free tickets for kids.

It doesn't get any better than this.

The Miami Dolphins did not make the playoffs this season but Kevin Nogle and his team at The Phinsider have been nice enough to help the fans of the teams who did. Kevin created playoff picture graphics for all of the NFL blogs to use over the past few weeks even though his team is not in it. Kevin also does a great job with his planning -- from having the playoff schedule to his team's schedule next year -- so that his readers know what's going on not just with his team, but the rest of the league. Kudos to Kevin and his team for planning ahead and helping all NFL fans stay informed. 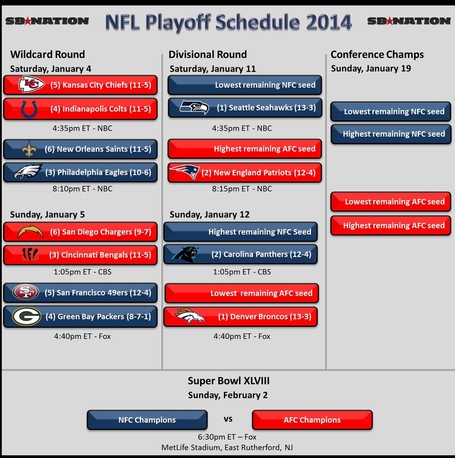 Cartilage Free Captainhas established itself as one of the top soccer blogs. Covering Tottenham Hotspur for SB Nation, they are constantly producing top-notch content. One way they've managed to capture their audience is by not being afraid to be creative, as they did with their A Christmas Carol-inspired, three-part series "A Christmas Tom Carroll." Easily one of the funnest reads of the holiday season.

Congrats to all four blogs for outstanding work over the past couple of weeks.