On the Internet, we live in a virtual world where connections are made but the tangible evidence isn't always present. So to build their community, and to do a little something that exists outside the virtual world, Royal Blue Mersey decided to send a teddy bear on a journey.

SB Nation has created so many wonderful communities over the years. People feel connected to each other even though they've never met or interacted in a "real world" way. But sometimes you wonder who are these friends made over the Internet, where do they live and what's their story? In order to bridge that divide, Royal Blue Mersey came up with their own take on an idea that originated with Gaslamp Ball.

Take one teddy bear emblazoned with the Everton crest, name him Tony Hibbeart, and send him on a trip around the world.

Members of the Royal Blue Mersey community sign-up to participate, meaning they are willing to receive the bear, post their story about why they are Everton fans, then send the bear on to the next person. They're also encouraged to take pictures with the bear at local landmarks.

I asked the creator of the idea, seanathan, about how it's going so far.

Q: How many people signed up for the Journey?

seanathan: We currently have around 40 people signed up for the Everton Journey across five continents, including stops in the United Kingdom, India, Malaysia, Indonesia, Australia, South Africa, Canada, and Latvia, in addition to numerous stops in the United States.

A map of the tentative stops on the world tour.

Q: How far has the bear gone so far?

seanathan:We've just kicked off the journey, so the UK is the only place the bear has visited so far. A trip to Goodison Park (Everton's home stadium in Liverpool) is next on the schedule, before the bear travels across the Atlantic to the United States.

Q:What do you hope comes out of this project for your community?

seanathan:Everton is truly a global football club, and the goal of this project is to reach Everton fans around the world and to tell their stories. One thing we've discovered is that people are usually attracted to Everton for unique and interesting reasons, and we want to give people the opportunity to share their own personal reasons for supporting the team. Along the way, we hope to grow our community while allowing fans around the world who share a mutual passion for Everton to come together.

Here is Tony Hibbeart receiving his send-off in Leeds: 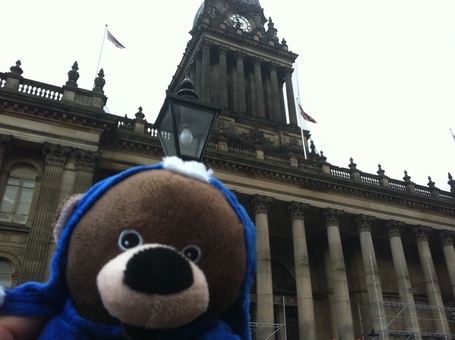 Tony also likes to watch Everton on TV, he caught the win over Newcastle. 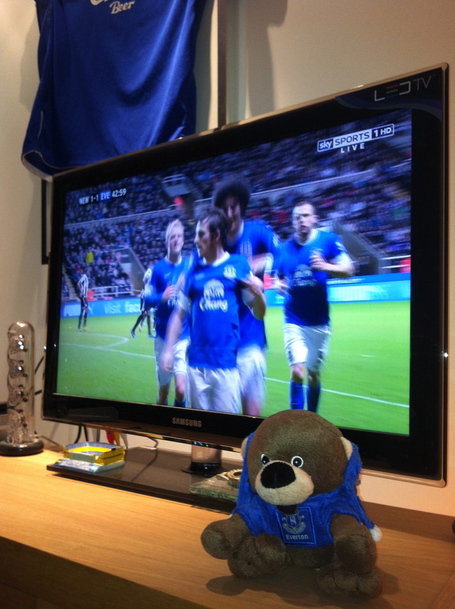 Next, he moves on to his spiritual home, Merseyside.

You can read about his further journeys here.

Also, be sure to check out the inspiration for his journey, The Sisterhood of the Traveling Jersey at Gaslamp Ball.