Facial hair has been grown for many reasons over time. Styles have come and gone, but Brotherly Game says mustaches are definitely back in fashion as long as they help end hunger in Philadelphia.

If you're in Philadelphia on March 2nd and happen to venture over to the season-opening game for the local MLS team, Philadelphia Union, don't be surprised when you see a collection of 'staches roaming the parking lot. It's just the Brotherly Game, SB Nation's Philadelphia Union blog, teaming up with the Sons of Ben, a local group of supporters of the MLS team, to end hunger in the city. For the last few year, these two organizations have been working together for charity in unique way.

Scott Kessler, editor at Brotherly Game, talks about the origin of 'Stache Bash for his site:

Jeremy Sharpe, a Sons of Ben member (Philadelphia Union supporters group), grew out a mustache that became legendary among fans and I helped him to take the interest in his facial hair into a charitable work. We chose to make shirts and scarves before the 2011 Union home opener and we managed to sell over 300 shirts and scarves combined. Thousands of dollars were raised through those sales and the game day festivities that we had to raise more money.

Due to the massive success of the first 'Stache Bash, we repeated this in 2012 to even greater success. This year we're also going to have a 'Stache Bash, which we hope will eclipse the $10,000 mark.

Another Union season kicks off, and we are ‘Stache-ing it up again and raising money for Help Kick Hunger. The '13 Bash will feature music acts, Bevan McShea and Philly's first and only Union themed band, Bearfight. We will once again have the Stache Bash raffle, and our friends at Bark tees have the official Stache Bash tee shirt and hoodie for sale. What better way to kick off our awesome new tailgate area than a huge party, live music, friends, & charity.

Even Union players have gotten in on the act. Midfielder Kyle Nakazawa changed his Twitter profile photo to an image of the ‘Stache Bash shirt. Amobi Okugo, Sheanon Williams, Jordan Harvey and Zach Pfeffer are also actively promoting the cause, with Harvey pledging to grow a mustache in support.

Heck, even Ben Franklin is getting in on it. 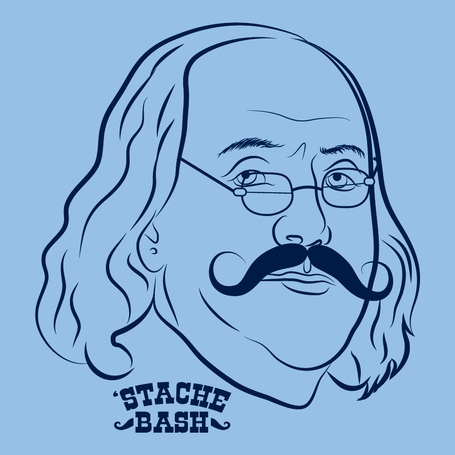 Kudos to Brotherly Game for using their community for something more than just talking about sports. SB Nation communities do all kinds of great things, and helping to stamp out hunger certainly qualifies as one!