The Denver Nuggets are one hot basketball team right now, they won their 13th in row on March 19th, and SB Nation blog Denver Stiffs celebrated it in style.

SB Nation blog Denver Stiffs has held eight previous Stiffs Night Out functions, where the blog members meet up to watch the Nuggets play and get some real-world community interaction. It's part of the cool things that can occur with SB Nation communities.

On this night, the 9th Night Out, Denver Stiffs editor Nate Timmons wanted a birthday win.

Happy Birthday Nate from the Nuggets who posted a win over Oklahoma City. The meet-up was a chance for the Sitffs community to get to know each other and talk about their shared passion, the Denver Nuggets. But it wasn't just for kicks, they also were doing a good deed for the community.

We had over 150 people in attendance and did another fundraiser for a local Denver hoops program for at-risk youth. Working with the Nuggets we were able to give away two sets of tickets to games and some season ticket holders donated tickets to give away as well. We also gave out a few Nuggets merchandise prizes with trivia.

Simply awesome. They also got a visit from Nuggets management.

Oh, and Nuggets vice president Masai Ujiri made a cameo appearance, just to throw a little extra karma into the mix. (That makes two SNO appearances by Mr. Ujiri - I doubt any other NBA GM has bothered attending this many fan rallies for their teams!)

Here's Mr. Ujiri with some Stiffs: 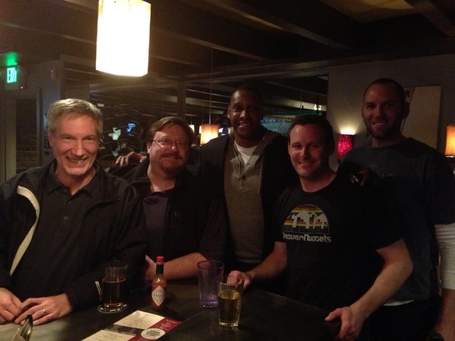 Congrats to the Nuggets on the win, and congrats to Denver Stiffs! Proving that SB Nation communities are more than just virtual news and opinion sites, they exist in the real world, and they can rally forces for fun and charity.