Lone Star Ball: The Tragedy Of One Rangers Fan Mobilizes A Community

The Newtown, CT mass-shooting was a tragedy beyond words. One particular Texas Rangers' fan had his precious daughter taken from him. You can't replace her, but a group of Rangers communities banded together to try and do what they could.

Share All sharing options for: Lone Star Ball: The Tragedy Of One Rangers Fan Mobilizes A Community

Robbie Parker had to live through a horror that is unimaginable to parents, his beautiful daughter Emilie lost her life in the Sandy Hook Elementary School shooting. We all still grieve for the victims and families of that senseless tragedy.

Mr. Parker was a Rangers fan, and one picture that circulated after the shooting brought tears to Rangers fans, including the guys over at SB Nation blog, Lone Star Ball. 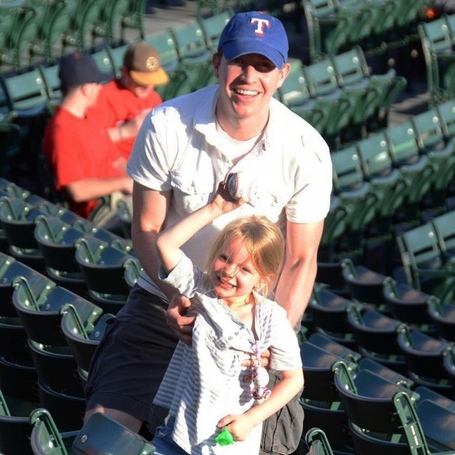 In honor of young Emilie, they decided to raise money for Emilie's Fund, created to assist the families affected by the shooting. We at SB Nation are so very proud of our communities when they step up and think beyond just sports, when they become involved in the world around them and try to help those in need. That's exactly what Lone Star Ball and its editor, Adam J. Morris, did.

Here's their report from back in December when they were collecting money.

The total amount collected by LSB and being sent to the Emilie Parker Memorial Fund is $8000. The response was overwhelming, and I'd like to thank everyone who sent in a donation. Again, I'm proud to be part of this community.

So thank you to Lone Star Ball, and their great community for getting involved and trying to do what they could to ease the suffering of Robbie Parker and the rest of the families involved in that awful scene.

Now, some three months later, the Texas Rangers announced they are going to have Robbie Parker throw out the first pitch for their home opener. Along they way, MLB.com recognized the contributions of Lone Star Ball and other North Texas organizations who gave so generously to Emilie's fund.

Mr. Parker, who grew up in North Texas, will be accompanied by his wife Alissa and daughters Madeline and Samantha for the first pitch ceremony. Mr. Parker is also a longtime Texas Rangers fan and took Emilie to several Rangers games in Arlington, Seattle, and Boston.

Through the efforts of several groups, including ESPN Dallas 103.3 and local baseball websites The Newberg Report, Lone Star Ball, and Baseball Time in Arlington, thousands of dollars have been donated by individuals in North Texas to Emilie's Fund, which assisted families of those impacted by the tragedy at Sandy Hook Elementary School.

There's nothing good about the start of this story, the nightmare of the Sandy Hook shootings. But through the efforts of people who cared, we can hope that the Parker family, and the other families, will one day heal.