We try to cover a lot of things about SB Nation here at Blog Huddle, but this story really has an unusual goal. We're pitching in to see if we can help.

We've spent a lot of time here at Blog Huddle spreading the news about SB Nation sites; what they're up to, how they help out in charity events, talking them up whenever they get cited for an award or just plain do something outstanding. But today's story is about something that is really unique.

We set the stage over at SB Nation's Chicago Cubs community, Bleed Cubbie Blue. Managing Editor Al Yellon received a request and decided to run with it. It centers around Verlon Walker who was a Cubs coach from 1961-70. He died of leukemia in 1971. Walker's daughter, Leigh Ann, was looking for help on a project recently and she turned to Al and BCB to help her out.

Leigh Ann is on a quest to find a recording of her dad's voice. Before you suggest checking with the Cubs or WGN, she's already done that; Pat Hughes, in particular, has been quite helpful to her, but they were unable to find anything. I also checked with BCBer kaseyi, who has quite a number of old recordings, but he was unable to locate anything from that era.

So that's why I'm asking you. Perhaps there's someone out there who has a recording of Walker being interviewed on WGN radio or TV during his decade as a Cubs coach, and for some reason saved that tape, or maybe you know of someone else who might have it.

Leigh Ann was only three when her father died, and she's created a personal blog documenting here search to find a recording of her father's voice.

Check out this vintage picture of her with her dad. 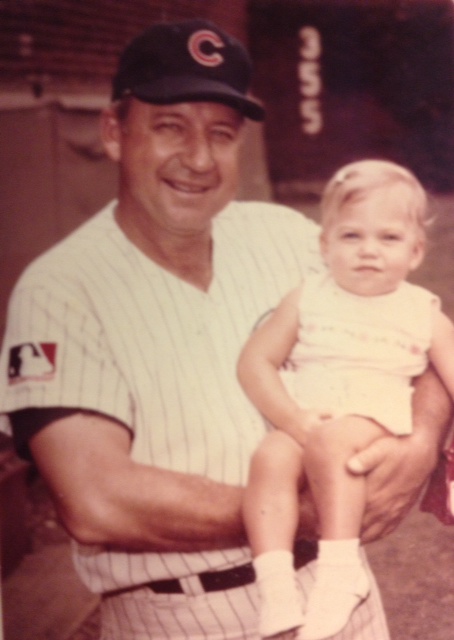 Check out Bleed Cubbie Blue to read the whole story. And hey, if you're a Cubs fans, maybe you have an idea to help her.

Thanks to Bleed Cubbie Blue for helping out. SB Nation communities are about more than just news, analysis and snark!