We bring you a special story today that we're proud to share. Sometimes, you can forget just how good people can be at times.

When you think of SB Nation you probably think about sports, maybe your favorite team or blog on the network. That's good, that's exactly how we'd like you to think. Our goal is to bring you the highest quality sports writing that still has a fan's perspective. But next to that goal we have another goal and that is to create thriving, online communities around each site. That's why SB Nation works so hard on getting our commenting system right and why we offer FanPosts and FanShots, it's to allow our readers to engage in the conversation. In fact, they drive the conversation. It's a core principle for us.

This next story is proof that it's working. SB Nation's sites aren't just a place to read the sports news, they're a place for fans to come together and create true connections; people form bonds, they become friends and they share parts of their lives with each other.

This is a tremendous example of a community circling around one of their own in a time of need. To give some background, commenter OhioHawk at BHGP was a community member who first showed up a number of years back typing in what appeared to be some bizarre dramatic verse. It turns out he is on an oxygen tank and has composed all his 4,889 (!) comments on the network with a speech translator. [CORRECTION: OhioHawk lets us know in the comments that he actually breathes through trachea tube and doesn't have a speech translator, is just a poor speller] That alone merits some praise (and is a shining example of the great thing we collectively have going). The heartbreaking news is that the cancer's returned and our friend OhioHawk is preparing to endure another lengthy round of always risky surgery.

While waiting for the surgery date to arrive, OhioHawk posted this article, telling BHGP just how much the community means to him. The outpouring of support was overwhelming, giving much strength and comfort to OhioHawk. He then got his daughter an account on BHGP so she could give word when the surgery was over. She proudly announced the surgery was a total success. Two days later, OhioHawk was back to posting at BHGP. Here's one of his latest:

god bless you all

And a pic of OhioHawk and his life-saving doctor. 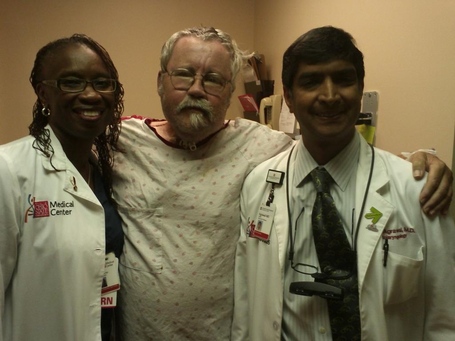 Sports are sports, we love them dearly, but they are not life and death. Stories like OhioHawk's remind us of what matters most: our family, our friends, those we choose to live our life with. Part of his life is the community at Black Heart Gold Pants. SB Nation is proud of the communities we've built. We wish all the best to OhioHawk!