At SB Nation, we take rivalry to the next level. Syracuse and Boston College now have their own competition and trophy.

Share All sharing options for: Introducing The Orange Eagle Trophy

More from our team sites

More from our team sites

It started out innocent enough. Syracuse and Boston College have been reunited in the ACC, reigniting a rivalry between the two Northeast colleges. Sure, we could have left it at just that. That would have been the easy thing to do. Normal sports fans probably would have left it at that, spending countless arguing over who is theoretically the better sports school.

But that's not how we roll at SB Nation. The SB Nation Syracuse blog, Troy Nunes Is An Absolute Magician, and the SB Nation Boston College blog, BC Interruption, decided they wanted more. They didn't want to just say they were the top dog in the rivalry, they wanted to be able to prove it. So they did what any insane bloggers would do, they created a scored competition. Yes, they actually made a scorecard for all the sports competitions that both schools would be participating in. They weren't interested in a theoretical winner, they wanted a true, just look at the scoreboard, winner.

And then they created a trophy. They recently introduced the Orange Eagle Trophy. This isn't just a figment of the imagination, but an actual 2-foot tall trophy of - well - an orange eagle. 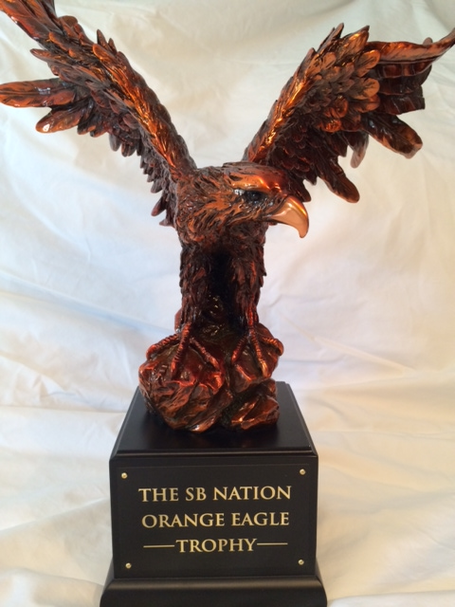 For the first season of the Orange Eagle trophy, Syracuse has a decided upper-hand. At last count, best as we can reconcile, they are up 45-20 over Boston College. It looks like Troy Nunes Is An Absolute Magician will emerge victorious and get the first inaugural season of the trophy emblazoned on their side of the base. 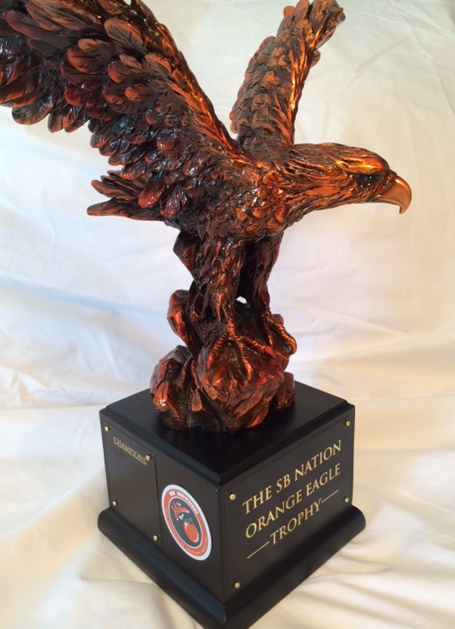 Congrats to both blogs for coming up with and participating in this ingenious idea to elevate a rivalry to the next level!